Antiretrovirals. Emtricitabine 200 mg, Elvitegravir 150 mg, Cobicistat 150 mg. FILM COAT. TABS.:30.
Adult., paed. 6 yrs. and older, wt. at least 25 kg: 1 tab. ×1/d with food. If the pt. misses a dose within 18 hrs. of the time it is usual. taken, the pt. should take the drug with food as soon as possible and resume the normal dosing schedule. If a pt. misses a dose by more than 18 hrs., the pt. should not take the missed dose and simply resume the usual dosing schedule. If the pt. vomit. within 1 h of taking the drug another tab. should be taken.
Tmt. of adults & adolesc. (aged 12 yrs.& older with bdy. wt. at least 35 kg) and In child. aged 6 yrs. & older with bdy wt at least 25 kg for whom alternative regimens are unsuitable due to toxicities infect. with HIV 1 without any known mutations assoc. with resist. to the integrase inhib. class, emtricitabine or tenofovir.
C/I:  Hypersens. Co-admin. with: Alfuzosin, amiodarone, quinidine, dihydroergotamine, ergometrine, ergotamine, cisapride, lovastatin, simvastatin, lomitapide, pimozide, lurasidone, sildenafil for tmt. of pulmon. arter. Hypertens., midazolam, triazolam, carbamazepine, phenobarbital, phenytoin, rifampicin, St. John’s wort (Hyperic. perfora.), dabigatran. 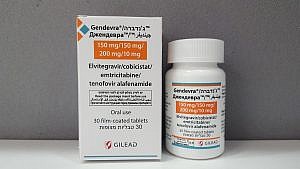 Adults and paediatric patients aged 6 years and older, weighing at least 25 kg: One tablet to be taken once daily with food.
If the patient misses a dose of Gendevra within 18 hours of the time it is usually taken, the patient should take Gendevra with food as soon as possible and resume the normal dosing schedule. If a patient misses a dose of Gendevra by more than 18 hours, the patient should not take the missed dose and simply resume the usual dosing schedule.
If the patient vomits within 1 hour of taking Gendevra another tablet should be taken.
Elderly: No dose adjustment of Gendevra is required in elderly patients.
Renal impairment:
No dose adjustment of Gendevra is required in adults or adolescents (aged at least 12 years and of at least 35 kg body weight) with estimated creatinine clearance (CrCl) ≥ 30 mL/min. Gendevra should be discontinued in patients with estimated CrCl that declines below 30 mL/min during treatment.
No dose adjustment of Gendevra is required in adults with end stage renal disease (estimated CrCl < 15 mL/min) on chronic haemodialysis; however, Gendevra should generally be avoided but may be used in these patients if the potential benefits are considered to outweigh the potential risks.
On days of haemodialysis, Gendevra should be administered after
completion of haemodialysis treatment.
Gendevra should be avoided in patients with estimated CrCl ≥ 15 mL/min and < 30 mL/min, or < 15 mL/min who are not on chronic haemodialysis, as the safety of Gendevra has not been established in these populations.
No data are available to make dose recommendations in children aged less than 12 years with renal impairment or in children less than 18 years with end stage renal disease.
Hepatic impairment: No dose adjustment of Gendevra is required in patients with mild (Child-Pugh Class A) or moderate (Child-Pugh Class B) hepatic impairment. Gendevra has not been studied in patients with severe hepatic impairment (Child-Pugh Class C); therefore, Gendevra is not recommended for use in patients with severe hepatic impairment.
Paediatric population: The safety and efficacy of Gendevra in children younger than 6 years of age, or weighing < 25 kg, have not yet been established. No data are available.
Method of administration: Gendevra should be taken orally, once daily with food. For patients who are unable to swallow the tablet whole, the tablet may be split in half and both halves taken one after the other, ensuring that the full dose is taken.
Due to the bitter taste, it is recommended that the film-coated tablet should not be chewed or crushed.

Patients with end stage renal disease on chronic haemodialysis: Gendevra should generally be avoided but may be used in adults with end stage renal disease (estimated CrCl < 15 mL/min) on chronic haemodialysis if the potential benefits outweigh the potential risks. In a study of Gendevra in HIV-1 infected adults with end stage renal disease (estimated CrCl < 15 mL/min) on chronic haemodialysis, efficacy was maintained through 48 weeks but emtricitabine exposure was significantly higher than in patients with normal renal function. Although there were no new safety issues identified, the implications of increased emtricitabine exposure remain uncertain.
Pregnancy: Treatment with cobicistat and elvitegravir during the second and third trimesters of pregnancy has been shown to result in lower elvitegravir exposures. Cobicistat levels decrease and may not provide sufficient boosting. The substantial reduction in elvitegravir exposure may result in virological failure and an increased risk of mother-to-child transmission of HIV infection. Therefore, therapy with Gendevra should not be initiated during pregnancy, and women who become pregnant during therapy with Gendevra should be switched to an alternative regimen.
Patients co-infected with HIV and hepatitis B or C virus: Patients with chronic hepatitis B or C treated with antiretroviral therapy are at an increased risk for
severe and potentially fatal hepatic adverse reactions.
The safety and efficacy of Gendevra in patients co-infected with HIV-1 and hepatitis C virus (HCV) have not been established.
Tenofovir alafenamide is active against hepatitis B virus (HBV). Discontinuation of Gendevra therapy in patients co-infected with HIV and HBV may be associated with severe acute exacerbations of hepatitis. Patients co-infected with HIV and HBV who discontinue Gendevra should be closely monitored with both clinical and laboratory follow-up for at least several months after stopping
treatment.
Liver disease: The safety and efficacy of This drug in patients with significant underlying liver disorders have not been established. Patients with pre-existing liver dysfunction, including chronic active hepatitis, have an increased frequency of liver function abnormalities during combination antiretroviral therapy (CART) and should be monitored according to standard practice. If there is evidence of worsening liver disease in such patients, interruption or discontinuation of treatment must be considered.
Weight and metabolic parameters: An increase in weight and in levels of blood lipids and glucose may occur during antiretroviral therapy. Such changes may in part be linked to disease control and life style. For lipids, there is in some cases evidence for a treatment effect, while for weight gain there is no strong evidence relating this to any particular treatment. For monitoring of blood lipids and glucose reference is made to established HIV treatment guidelines. Lipid disorders should be managed as clinically appropriate.
Immune Reactivation Syndrome: In HIV infected patients treated with CART, including with emtricitabine, immune reactivation syndrome has been reported. In HIV infected patients with severe immune deficiency at the time of institution of CART, an inflammatory reaction to asymptomatic or residual opportunistic pathogens may arise and cause serious clinical conditions, or aggravation of symptoms. Typically, such reactions have been observed within the first few weeks or months of initiation of CART. Relevant examples include cytomegalovirus retinitis, generalised and/or focal mycobacterial infections, and Pneumocystis jirovecii pneumonia. Any inflammatory symptoms should be evaluated and treatment instituted when necessary.
Autoimmune disorders (such as Graves’ disease and autoimmune hepatitis) have also been reported to occur in the setting of immune reactivation; however, the reported time to onset is more variable, and these events can occur many months after initiation of treatment.
Opportunistic infections: Patients receiving this drug or any other antiretroviral therapy may continue to develop opportunistic infections and other complications of HIV infection, and therefore should remain under close clinical observation by physicians experienced in the treatment of patients with HIV associated diseases.
Osteonecrosis: Although the aetiology is considered to be multifactorial (including corticosteroid use, alcohol consumption, severe immunosuppression, higher body mass index), cases of osteonecrosis have been reported particularly in patients with advanced HIV disease and/or long-term exposure to CART. Patients should be advised to seek medical advice if they experience joint aches and pain, joint stiffness or difficulty in movement.
Nephrotoxicity: A potential risk of nephrotoxicity resulting from chronic exposure to low levels of tenofovir due to dosing with tenofovir alafenamide cannot be excluded.
It is recommended that renal function is assessed in all patients prior to, or when initiating, therapy with Gendevra and that it is also monitored during therapy in all patients as clinically appropriate. In patients who develop clinically significant decreases in renal function, or evidence of proximal renal
tubulopathy, discontinuation of Gendevra should be considered.
Co-administration of other medicinal products: Some medicinal products should not be co-administered with this drug.
Contraception requirements: Female patients of childbearing potential should use either a hormonal contraceptive containing at least 30 μg ethinylestradiol and containing norgestimate as the progestagen or should use an alternative reliable method of contraception. The effect of co-administration of this drug with oral contraceptives containing progestagens other than norgestimate is not known and, therefore, should be avoided.
Paediatric population: In a clinical study in which Gendevra was administered to 23 HIV-1-infected paediatric patients with a mean age of 10 years (range 8 to 11 years), the mean exposures of elvitegravir, cobicistat, emtricitabine, tenofovir, and tenofovir alafenamide were higher (20 to 80%) than the mean exposures achieved in adults
Excipients: This drug contains lactose monohydrate. Consequently, patients with rare hereditary problems of galactose intolerance, the Lapp lactase deficiency, or glucose-galactose malabsorption should not take this medicinal product.
See prescribing information for full details.

Gendevra should not be co-administered with other antiretroviral medicinal products. Therefore, information regarding drug-drug interactions with other antiretroviral products (including protease inhibitors [PIs] and non-nucleoside reverse transcriptase inhibitors [NNRTIs]) is not provided. Interaction studies have only been performed in adults.
Gendevra should not be administered concomitantly with medicinal products containing tenofovir alafenamide, tenofovir disoproxil, lamivudine or adefovir dipivoxil used for the treatment of HBV infection.
Concomitant use contraindicated: Co-administration of Gendevra and some medicinal products that are primarily metabolised by CYP3A may result in increased plasma concentrations of these products, which are associated with the potential for serious or life-threatening adverse reactions such as peripheral vasospasm or ischaemia (e.g., dihydroergotamine, ergotamine, ergometrine), or myopathy, including rhabdomyolysis (e.g., simvastatin, lovastatin), lomitapide or prolonged or increased sedation or respiratory depression (e.g., orally administered midazolam or triazolam). Co-administration of Gendevra and other medicinal products primarily metabolised by CYP3A such as amiodarone, quinidine, cisapride, pimozide, lurasidone, alfuzosin and sildenafil for pulmonary arterial hypertension is contraindicated.
Co-administration of Gendevra and some medicinal products that induce CYP3A such as St. John’s wort (Hypericum perforatum), rifampicin, carbamazepine, phenobarbital, and phenytoin may result in significantly decreased cobicistat and elvitegravir plasma concentrations, which may result in loss of therapeutic effect and development of resistance.
See prescribing information for full details.

Pregnancy: There are no adequate and well-controlled studies of this drug or its components in pregnant women. Gendevra should be used during pregnancy only if the potential benefit justifies the potential risk to the foetus.
Lactation: There is insufficient information on the effects of elvitegravir, cobicistat, emtricitabine and tenofovir in newborns/infants. Therefore, Gendevra should not be used during breast-feeding.
In order to avoid transmission of HIV to the infant it is recommended that HIV infected women do not breast-feed their infants under any circumstances.
See prescribing information for full details.

Shelf-life: After first opening, use within 30 days.
Storage: Store in the original package in order to protect from moisture. Keep the bottle tightly closed.