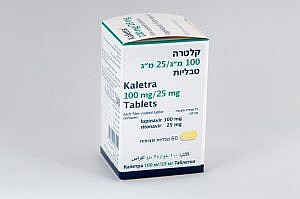 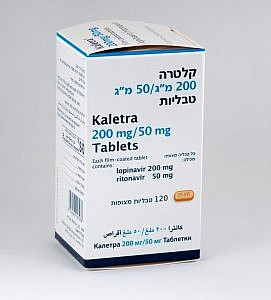 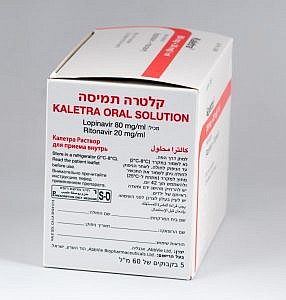 In combination with other antiretroviral agents for the treatment of HIV-1 infection.
The following points should be considered when initiating therapy with KALETRA:
– The use of other active agents with KALETRA is associated with a greater likelihood of treatment response.
– Genotypic or phenotypic testing and/or treatment history should guide the use of KALETRA. The number of baseline lopinavir resistance-associated substitutions affects the virologic response to KALETRA.

Risk of Serious Adverse Reactions Due to Drug Interactions: This drug is a CYP3A inhibitor. Initiating treatment with this drug in patients receiving medications metabolized by CYP3A or initiating medications metabolized by CYP3A in patients already maintained on this drug may result in increased plasma concentrations of concomitant medications. Higher plasma concentrations of concomitant medications can result in increased or prolonged therapeutic or adverse effects, potentially leading to severe, life-threatening or fatal events.
Toxicity in Preterm Neonates: Oral solution contains the excipients alcohol (42.4% v/v) and propylene glycol (15.3% w/v). When administered concomitantly with propylene glycol, ethanol competitively inhibits the metabolism of propylene glycol, which may lead to elevated concentrations. Preterm neonates may be at increased risk of propylene glycol-associated adverse events due to diminished ability to metabolize propylene glycol, thereby leading to accumulation and potential adverse events.
Pancreatitis: Pancreatitis has been observed in patients receiving this drug therapy, including those who developed marked triglyceride elevations. In some cases, fatalities have been observed.
Hepatotoxicity: Patients with underlying hepatitis B or C or marked elevations in transaminase prior to treatment may be at increased risk for developing or worsening of transaminase elevations or hepatic decompensation with use of this drug.
Diabetes Mellitus/Hyperglycemia: New onset diabetes mellitus, exacerbation of pre-existing diabetes mellitus, and hyperglycemia have been reported during post-marketing surveillance in HIV-1 infected patients receiving protease inhibitor therapy.
Interval Prolongation: Lopinavir/ritonavir prolongs the PR interval in some patients. Cases of second or third degree atrioventricular block have been reported. This formulation should be used with caution in patients with underlying structural heart disease, pre-existing conduction system abnormalities, ischemic heart disease or cardio-myopathies, as these patients may be at increased risk for developing cardiac conduction abnormalities.
QT Interval Prolongation: Postmarketing cases of QT interval prolongation and torsade de pointes have been reported although causality of this drug could not be established.
Immune Reconstitution Syndrome: Immune reconstitution syndrome has been reported in patients treated with combination antiretroviral therapy, including this drug. During the initial phase of combination antiretroviral treatment, patients whose immune system responds may develop an inflammatory response to indolent or residual opportunistic infections (such as Mycobacterium avium infection, CMV, Pneumocystis jirovecii pneumonia [PCP], or tuberculosis) which may necessitate further evaluation and treatment.
Fat Redistribution: Redistribution/accumulation of body fat including central obesity, dorsocervical fat enlargement (buffalo hump), peripheral wasting, facial wasting, breast enlargement, and “cushingoid appearance” have been observed in patients receiving antiretroviral therapy. The mechanism and long-term consequences of these events are currently unknown. A causal relationship has not been established.
Lipid Elevations: Treatment with this drug has resulted in large increases in the concentration of total cholesterol and triglycerides.
Patients with Hemophilia: Increased bleeding, including spontaneous skin hematomas and hemarthrosis have been reported in patients with hemophilia type A and B treated with protease inhibitors. In some patients additional factor VIII was given. In more than half of the reported cases, treatment with protease inhibitors was continued or reintroduced. A causal relationship between protease inhibitor therapy and these events has not been established.
See prescribing information for full details.

Potential for KALETRA to Affect Other Drugs: Lopinavir/ritonavir is an inhibitor of CYP3A and may increase plasma concentrations of agents that are primarily metabolized by CYP3A. Agents that are extensively metabolized by CYP3A and have high first pass metabolism appear to be the most susceptible to large increases in AUC (> 3-fold) when coadministered with KALETRA. Thus, co-administration of KALETRA with drugs highly dependent on CYP3A for clearance and for which elevated plasma concentrations are associated with serious and/or lifethreatening events is contraindicated. Co-administration with other CYP3A substrates may require a dose adjustment or additional monitoring – See prescribing information for full details.
Additionally, KALETRA induces glucuronidation.
Published data suggest that lopinavir is an inhibitor of OATP1B1.
Potential for Other Drugs to Affect Lopinavir: Lopinavir/ritonavir is a CYP3A substrate; therefore, drugs that induce CYP3A may decrease lopinavir plasma concentrations and reduce KALETRA’s therapeutic effect. Although not observed in the KALETRA/ketoconazole drug interaction study, co-dministration of KALETRA and other drugs that inhibit CYP3A may increase lopinavir plasma concentrations.
Drugs with No Observed or Predicted Interactions with KALETRA: Drug interaction or clinical studies reveal no clinically significant interaction between KALETRA and desipramine (CYP2D6 probe), etravirine, pitavastatin, pravastatin, stavudine, lamivudine, omeprazole, raltegravir, ranitidine, or rilpivirine.
Based on known metabolic profiles, clinically significant drug interactions are not expected between KALETRA and dapsone, trimethoprim/sulfamethoxazole, azithromycin, erythromycin, or fluconazole.
See prescribing information for full details.

Pregnancy: Available data from the Antiretroviral Pregnancy Registry show no difference in the risk of overall major birth defects compared to the background rate for major birth defects in the general population. No treatment-related malformations were observed when lopinavir in combination with ritonavir was
administered to pregnant rats or rabbits; however embryonic and fetal developmental toxicities occurred in rats administered maternally toxic doses.
Lactation: The Centers for Disease Control and Prevention recommend that HIV-1 infected mothers not breastfeed their infants to avoid risking postnatal transmission of HIV-1. Because of the potential for: 1) HIV transmission (in HIV-negative infants), 2) developing viral resistance (in HIV- positive infants), and 3)
adverse reactions in the breastfed infant, instruct mothers not to breastfeed if they are receiving KALETRA.
See prescribing information for full details.

Overdoses with oral solution have been reported. One of these reports described fatal cardiogenic shock in a 2.1 kg infant who received a single dose of 6.5 mL of  oral solution(520 mg lopinavir, approximately 10-fold above the recommended lopinavir dose) nine days prior. The following events have been reported in association with unintended overdoses in preterm neonates: complete AV block, cardiomyopathy, lactic acidosis, and acute renal failure. Healthcare professionals should be aware that oral solution is highly concentrated and therefore, should pay special attention to accurate calculation of the dose of this drug transcription of the medication order, dispensing information and dosing instructions to minimize the risk for medication errors and overdose. This is especially important for infants and young children.
Oral solution contains 42.4% alcohol (v/v) and 15.3% propylene glycol (w/v). Ingestion of the product over the recommended dose by an infant or a young child could result in significant toxicity and could potentially be lethal. Human experience of acute overdose with this drug is limited. Treatment of overdose with should consist of general supportive measures including monitoring of vital signs and observation of the clinical status of the patient. There is no specific antidote for overdose. If indicated, elimination of unabsorbed drug should be achieved gastric lavage. Administration of activated charcoal may also be used to aid in removal of unabsorbed drug. Since Lopinavir is highly protein bound, dialysis is unlikely to be beneficial in significant removal of the drug. However, dialysis can remove both alcohol and propylene glycol in the case of overdose with oral solution.
See prescribing information for full details.