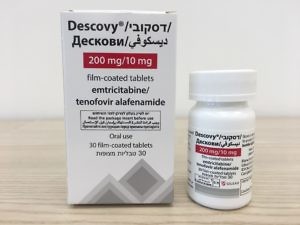 Adults and adolescents aged 12 years and older, weighing at least 35 kg:
Dose of this formulation according to third agent in the HIV treatment regimen:
Descovy 200/10 mg once daily: Atazanavir with ritonavir or cobicistat; Darunavir with ritonavir or cobicistat*; Lopinavir with ritonavir.
Descovy 200/25 mg once daily: Dolutegravir, efavirenz, maraviroc, nevirapine, rilpivirine, raltegravir.
*Descovy 200/10 mg in combination with darunavir 800 mg and cobicistat 150 mg, administered as a fixed-dose combination tablet, was studied in treatment naive subjects. See prescribing information for full details.
If the patient misses a dose of this drug within 18 hours of the time it is usually taken, the patient should take the drug  as soon as possible and resume the normal dosing schedule. If a patient misses a dose  by more than 18 hours, the patient should not take the missed dose and simply resume the usual dosing schedule.
If the patient vomits within 1 hour of taking this drug  another tablet should be taken.
Elderly: No dose adjustment is required in elderly patients.
Renal impairment: No dose adjustment is required in adults or adolescents (aged at least 12 years and of at least 35 kg body weight) with estimated creatinine clearance (CrCl) ≥ 30 mL/min.
The drug should not be initiated in patients with estimated CrCl < 30 mL/min as there are limited data available regarding this population.
The drug should be discontinued in patients with estimated CrCl that declines below 30 mL/min during treatment.
Hepatic impairment: No dose adjustment is required in patients with mild (Child-Pugh Class A) or moderate (Child-Pugh Class B) hepatic impairment. This formulation has not been studied in patients with severe hepatic impairment (Child-Pugh Class C); therefore, The drug  is not recommended for use in patients with severe hepatic impairment.
Paediatric population: The safety and efficacy of the drug in children younger than 12 years of age, or weighing < 35 kg, have not yet been established. No data are available.
Method of administration: Descovy should be taken orally, once daily with or without food. The film-coated tablet should not be chewed, crushed, or split as it has a very bitter taste and it may impact the absorption of Descovy.

Indicated in combination with other antiretroviral agents for the treatment of adults and adolescents (aged 12 years and older with body weight at least 35 kg) infected with human immunodeficiency virus type 1 (HIV-1).

Hypersensitivity to the active substances or to any of the excipients.

Pregnancy: There are no adequate and well-controlled studies of this drug or its components in pregnant women. Descovy should be used during pregnancy only if the potential benefit justifies the potential risk to the foetus.
Lactation: It is not known whether tenofovir alafenamide is excreted in human milk. Emtricitabine is excreted in human milk. There is insufficient information on the effects of emtricitabine and tenofovir in newborns/infants.
Therefore, Descovy should not be used during breast-feeding.
In order to avoid transmission of HIV to the infant it is recommended that HIV infected women do not breast-feed their infants under any circumstances.
See prescribing information for full details.

If overdose occurs the patient must be monitored for evidence of toxicity.Treatment of overdose with this drug consists of general supportive measures including monitoring of vital signs as well as observation of the clinical status of the patient.
Emtricitabine can be removed by haemodialysis, which removes approximately 30% of the emtricitabine dose over a 3 hour dialysis period starting within 1.5 hours of emtricitabine dosing. Tenofovir is efficiently removed by haemodialysis with an extraction coefficient of approximately 54%. It is not known whether emtricitabine or tenofovir can be removed by peritoneal dialysis.

Storage: Store in the original package in order to protect from moisture. After first opening, use within 60 days.