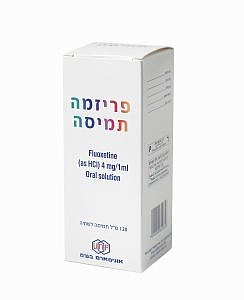 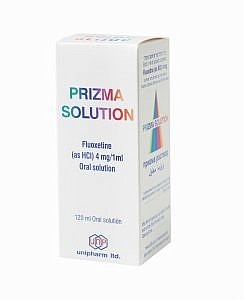 Half-life: The long elimination half-lives of both fluoxetine and norfluoxetine should be borne in mind when considering pharmacodynamic or pharmacokinetic drug interactions (e.g., when switching from fluoxetine to other antidepressants).
Contra-indicated combinations
Irreversible, non-selective monoamine oxidase inhibitors (e.g. iproniazid): Some cases of serious and sometimes fatal reactions have been reported in patients receiving an SSRI in combination with an irreversible, non-selective monoamine oxidase inhibitor (MAOI). These cases presented with features resembling serotonin syndrome (which may be confounded with [or diagnosed as] neuroleptic malignant syndrome). Cyproheptadine or dantrolene may benefit patients experiencing such reactions. Symptoms of a drug interaction with a MAOI include: hyperthermia, rigidity, myoclonus, autonomic instability with possible rapid fluctuations of vital signs, mental status changes that include confusion, irritability and extreme agitation progressing to delirium and coma. Therefore, fluoxetine is contra-indicated in combination with an irreversible, non-selective MAOI. Because of the two weeks-lasting effect of the latter, treatment of fluoxetine should only be started 2 weeks after discontinuation of an irreversible, non-selective MAOI. Similarly, at least 5 weeks should elapse after discontinuing fluoxetine treatment before starting an irreversible, non-selective MAOI. Metoprolol used in cardiac failure: risk of metoprolol adverse events, including excessive bradycardia, may be increased because of an inhibition of its metabolism by fluoxetine.
Not recommended combinations
Tamoxifen: Pharmacokinetic interaction between CYP2D6 inhibitors and tamoxifen, showing a 65-75 % reduction in plasma levels of one of the more active forms of the tamoxifen, i.e. endoxifen, has been reported in the literature. Reduced efficacy of tamoxifen has been reported with concomitant usage of some SSRI antidepressants in some studies. As a reduced effect of tamoxifen cannot be excluded, co-administration with potent CYP2D6 inhibitors (including fluoxetine) should whenever possible be avoided.
Alcohol: In formal testing, fluoxetine did not raise blood alcohol levels or enhance the effects of alcohol. However, the combination of SSRI treatment and alcohol is not advisable.
MAOI-A including linezolid and methylthioninium chloride (methylene blue): Risk of serotonin syndrome including diarrhoea, tachycardia, sweating, tremor, confusion or coma. If the concomitant use of these active substances with fluoxetine cannot be avoided, close clinical monitoring should be undertaken and the concomitant agents should be initiated at the lower recommended dose. Mequitazine: risk of mequitazine adverse events (such as QT prolongation) may be increased because of an inhibition of its metabolism by fluoxetine.
Combinations requiring caution
Phenytoin: Changes in blood levels have been observed when combined with fluoxetine. In some cases manifestations of toxicity have occurred. Consideration should be given to using conservative titration schedules of the concomitant drug and to monitoring clinical status.
Serotoninergic drugs (lithium, tramadol, triptans, tryptophan, selegiline (MAOI-B), St. John’s Wort (Hypericum perforatum)): There have been reports of mild serotonin syndrome when SSRIs were given with drugs also having a serotoninergic effect. Therefore, the concomitant use of fluoxetine with these drugs should be undertaken with caution, with closer and more frequent clinical monitoring. Use with triptans carries the additional risk of coronary vasoconstriction and hypertension. QT interval prolongation: Pharmacokinetic and pharmacodynamic studies between fluoxetine and other medicinal products that prolong the QT interval have not been performed. An additive effect of fluoxetine and these medicinal products cannot be excluded. Therefore, co-administration of fluoxetine with medicinal products that prolong the QT interval, such as Class IA and III antiarrhythmics, antipsychotics (e.g. phenothiazine derivatives, pimozide, haloperidol), tricyclic antidepressants, certain antimicrobial agents (e.g. sparfloxacin, moxifloxacin, erythromycin IV (intravenous), pentamidine), anti-malaria treatment particularly halofantrine, certain antihistamines (astemizole, mizolastine), should be used with caution.
Drugs affecting haemostasis (oral anticoagulants, whatever their mechanism, platelets antiaggregants including aspirin and NSAIDs): Risk of increased bleeding. Clinical monitoring, and more frequent monitoring of INR with oral anticoagulants, should be made. A dose adjustment during the fluoxetine treatment and after its discontinuation may be suitable.
Cyproheptadine: There are individual case reports of reduced antidepressant activity of fluoxetine when used in combination with cyproheptadine.
Drugs inducing hyponatremia: Hyponatremia is an undesirable effect of fluoxetine. Use in combination with other agents associated with hyponatremia (e.g. diuretics, desmopressin, carbamazepine and oxcarbazepine) may lead to an increased risk.
Drugs lowering the epileptogenic threshold: Seizures are an undesirable effect of fluoxetine. Use in combination with other agents which may lower the seizure threshold (for example, TCAs, other SSRIs, phenothiazines, butyrophenones, mefloquine, chloroquine, bupropion, tramadol) may lead to an increased risk.
Other drugs metabolised by CYP2D6: Fluoxetine is a strong inhibitor of CYP2D6 enzyme, therefore concomitant therapy with drugs also metabolised by this enzyme system may lead to drug interactions, notably those having a narrow therapeutic index (such as flecainide, encainide, propafenone and nebivolol) and those that are titrated, but also with atomoxetine, carbamazepine, tricyclic antidepressants and risperidone. They should be initiated at or adjusted to the low end of their dose range. This may also apply if fluoxetine has been taken in the previous 5 weeks.

Pregnancy: Some epidemiological studies suggest an increased risk of cardiovascular defects associated with the use of fluoxetine during the first trimester. The mechanism is unknown. Overall the data suggest that the risk of having an infant with a cardiovascular defect following maternal fluoxetine exposure is in the region of 2/100 compared with an expected rate for such defects of approximately 1/100 in the general population. Epidemiological data have suggested that the use of SSRIs in pregnancy, particularly in late pregnancy, may increase the risk of persistent pulmonary hypertension in the newborn (PPHN). The observed risk was approximately 5 cases per 1000 pregnancies. In the general population 1 to 2 cases of PPHN per 1000 pregnancies occur. Abrupt discontinuation of therapy should be avoided during pregnancy. If fluoxetine is used during pregnancy, caution should be exercised, especially during late pregnancy or just prior to the onset of labour since some other effects have been reported in neonates: irritability, tremor, hypotonia, persistent crying, difficulty in sucking or in sleeping. These symptoms may indicate either serotonergic effects or a withdrawal syndrome. The time to occur and the duration of these symptoms may be related to the long half-life of fluoxetine (4-6 days) and its active metabolite, norfluoxetine (4-16 days). Observational data indicate an increased risk (less than 2-fold) of potpartum haemorrhage following SSRI/SNRI exposure within the month prior to birth.
Lactation: Fluoxetine and its metabolite norfluoxetine, are known to be excreted in human breast milk. Adverse events have been reported in breastfeeding infants. If treatment with fluoxetine is considered necessary, discontinuation of breastfeeding should be considered; however, if breastfeeding is continued, the lowest effective dose of fluoxetine should be prescribed.
Fertility
Impact on human fertility has not been observed so far. Human case reports with some SSRI’s have shown that an effect on sperm quality is reversible.

Symptoms
Cases of overdose of fluoxetine alone usually have a mild course. Symptoms of overdose have included nausea, vomiting, seizures, cardiovascular dysfunction ranging from asymptomatic arrhythmias (including nodal rhythm and ventricular arrhythmias) or ECG changes indicative of QTc prolongation to cardiac arrest (including very rare cases of Torsades de Pointes), pulmonary dysfunction, and signs of altered CNS status ranging from excitation to coma. Fatality attributed to overdose of fluoxetine alone has been extremely rare. Rarely features of the “serotonin syndrome” may occur. This includes alteration of mental status’ neuromuscular hyperactivity and autonomic instability. There may be hyperpyrexia and elevation of serum creatine kinase. Rhabdomyolysis is rare.
Management
Cardiac and vital signs monitoring are recommended, along with general symptomatic and supportive measures. No specific antidote is known. Forced diuresis, dialysis, haemoperfusion, and exchange transfusion are unlikely to be of benefit. Activated charcoal, which may be used with sorbitol, may be as or more effective than emesis or lavage. In managing overdosage, consider the possibility of multiple drug involvement. An extended time for close medical observation may be needed in patients who have taken excessive quantities of a tricyclic antidepressant if they are also taking, or have recently taken, fluoxetine.

Oral solution contains sucrose Patients with rare hereditary problems of fructose intolerance, glucose-galactose malabsorption or sucrase-isomaltase insufficiency should not take this medicine.
Discontinuation of Treatment
Symptoms associated with discontinuation of fluoxetine, SNRIs, and SSRIs, have been reported.
Withdrawal symptoms seen on discontinuation of fluoxetine: Abrupt discontinuation should be avoided. When stopping treatment, the dose should be gradually reduced over a period of at least one to two weeks in order to reduce the risk of withdrawal reactions. If intolerable symptoms occur following a decrease in the dose or upon discontinuation of treatment, then resuming the previously prescribed dose may be considered. Subsequently, the physician may continue decreasing the dose, but at a more gradual rate.