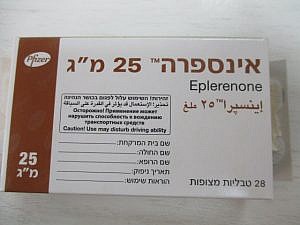 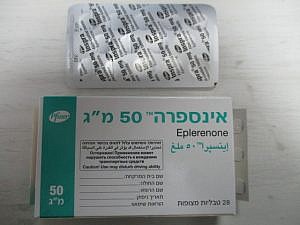 Hypersensitivity to the active substance or to any of the excipients.
Patients with serum potassium level > 5.0 mmol/L at initiation.
Patients with severe renal insufficiency (eGFR <30 mL per minute per 1.73 m²).
Patients with severe hepatic insufficiency (Child-Pugh Class C).
Patients receiving potassium-sparing diuretics, or strong inhibitors of CYP 3A4 (e.g., itraconazole, ketoconazole, ritonavir, nelfinavir, clarithromycin, telithromycin and nefazodone).
The combination of an angiotensin converting enzyme (ACE) inhibitor and an angiotensin receptor blocker (ARB) with eplerenone.

Pharmacodynamic interactions
Potassium-sparing diuretics and potassium supplements: Due to increased risk of hyperkalaemia, eplerenone should not be administered to patients receiving other potassium-sparing diuretics and potassium supplements. Potassium-sparing diuretics may also potentiate the effect of anti-hypertensive agents and other diuretics.
ACE inhibitors, ARBs: The risk of hyperkalaemia may increase when eplerenone is used in combination with an ACE inhibitor and/or an ARB. A close monitoring of serum potassium and renal function is recommended, especially in patients at risk for impaired renal function, e.g., the elderly. The triple combination of an ACE inhibitor and an ARB with eplerenone should not be used.
Lithium: Drug interaction studies of eplerenone have not been conducted with lithium. However, lithium toxicity has been reported in patients receiving lithium concomitantly with diuretics and ACE inhibitors. Coadministration of eplerenone and lithium should be avoided. If this combination appears necessary, lithium plasma concentrations should be monitored.
Cyclosporin, tacrolimus: Cyclosporin and tacrolimus may lead to impaired renal function and increase the risk of hyperkalaemia. The concomitant use of eplerenone and cyclosporin or tacrolimus should be avoided. If needed, close monitoring of serum potassium and renal function are recommended when cyclosporine and tacrolimus are to be administered during treatment with eplerenone.
Non-steroidal anti-inflammatory drugs (NSAIDs): Treatment with NSAIDs may lead to acute renal failure by acting directly on glomerular filtration, especially in at-risk patients (elderly and/or dehydrated patients). Patients receiving eplerenone and NSAIDs should be adequately hydrated and be monitored for renal function prior to initiating treatment.
Trimethoprim: The concomitant administration of trimethoprim with eplerenone increases the risk of hyperkalaemia. Monitoring of serum potassium and renal function should be made, particularly in patients with renal impairment and in the elderly.
Alpha-1-blockers (e.g. prazosin, alfuzosine): When alpha-1-blockers are combined with eplerenone, there is the potential for increased hypotensive effect and/or postural hypotension. Clinical monitoring for postural hypotension is recommended during alpha-1-blocker co-administration.
Tricyclic anti-depressants, neuroleptics, amifostine, baclofene: Co-administration of these drugs with eplerenone may potentially increase antihypertensive effects and risk of postural hypotension.
Glucocorticoids, tetracosactide: Co-administration of these drugs with eplerenone may potentially decrease antihypertensive effects (sodium and fluid retention).
Pharmacokinetic interactions
In vitro studies indicate that eplerenone is not an inhibitor of CYP1A2, CYP2C19, CYP2C9, CYP2D6 or CYP3A4 isozymes. Eplerenone is not a substrate or an inhibitor of P-Glycoprotein.
Digoxin: Systemic exposure (AUC) to digoxin increases by 16% (90% CI: 4% – 30%) when co-administered with eplerenone. Caution is warranted when digoxin is dosed near the upper limit of therapeutic range.
Warfarin: No clinically significant pharmacokinetic interactions have been observed with warfarin. Caution is warranted when warfarin is dosed near the upper limit of therapeutic range.
CYP3A4 substrates: Results of pharmacokinetic studies with CYP3A4 probe-substrates, i.e. midazolam and cisapride, showed no significant pharmacokinetic interactions when these drugs were coadministered with eplerenone.
CYP3A4 inhibitors:
– Strong CYP3A4 inhibitors: Significant pharmacokinetic interactions may occur when eplerenone is coadministered with drugs that inhibit the CYP3A4 enzyme. A strong inhibitor of CYP3A4 ( ketoconazole 200 mg BID) led to a 441% increase in AUC of eplerenone. The concomitant use of eplerenone with strong CYP3A4 inhibitors such as ketoconazole, itraconazole, ritonavir, nelfinavir, clarithromycin, telithromycin and nefazadone, is contra-indicated.
– Mild to moderate CYP3A4 inhibitors: Co-administration with erythromycin, saquinavir, amiodarone, diltiazem, verapamil, or fluconazole has led to significant pharmacokinetic interactions with rank order increases in AUC ranging from 98% to 187%. Eplerenone dosing should therefore not exceed 25 mg daily when mild to moderate inhibitors of CYP3A4 are co-administered with eplerenone.
CYP3A4 inducers: Co-administration of St John’s wort (a strong CYP3A4 inducer) with eplerenone caused a 30 % decrease in eplerenone AUC. A more pronounced decrease in eplerenone AUC may occur with stronger CYP3A4 inducers such as rifampicin. Due to the risk of decreased eplerenone efficacy, the concomitant use of strong CYP3A4 inducers (rifampicin, carbamazepine, phenytoin, phenobarbital, St John’s wort) with eplerenone is not recommended.
Antacids: Based on the results of a pharmacokinetic clinical study, no significant interaction is expected when antacids are coadministered with eplerenone.

Pregnancy: There are no adequate data on the use of eplerenone in pregnant women. Caution should be exercised prescribing eplerenone to pregnant women.
Lactation: It is unknown if eplerenone is excreted in human breast milk after oral administration. Because of the unknown potential for adverse effects on the breast fed infant, a decision should be made whether to discontinue breast-feeding or discontinue the drug, taking into account the importance of the drug to the mother.
See prescribing information for full details.

No cases of adverse events associated with overdose of eplerenone in humans have been reported. The most likely manifestation of human overdose would be anticipated to be hypotension or hyperkalaemia. Eplerenone cannot be removed by haemodialysis. Eplerenone has been shown to bind extensively to charcoal. If symptomatic hypotension should occur, supportive treatment should be initiated. If hyperkalaemia develops, standard treatment should be initiated.