Biguanide, Thiazolidinediones. Pioglitazone (as HCl) 15 mg, Metformin Hydrochloride 850 mg. F.C. TABS.: 56. Adult. with normal renal funct. (GFR ≥ 90 mL/min): The recomm. dose of Competact is 30 mg/day pioglitazone plus 1,700 mg/day of metformin HCl (this dose is achievable with 1 tab. of 15 mg/850 mg, taken ×2/d.
Dose titration with pioglitazone (added to the optimal dose of metformin) should be consid. before the pt. is switched to this medication. See lit.
Second line tmt. of type 2 diabet. mell. adult pts., particularly overweight pts., who are unable to achieve suffic. glycaem. control at their maxim. tolerated dose of oral metformin alone.
After initiat. of the. with pioglitazone, pts. should be reviewed after 3-6 mnths. to assess adequacy of response to tmt. (e.g. reduct. in HbA1c). In pts. who fail to show an adequate response, pioglitazone should be discont. In light of potent. risks with prolong. ther., prescribers should confirm at subseq. routine reviews that the benefit of pioglitazone is maintain.
C/I: Hypersens. Cardiac fail./ history of card. fail. (NYHA stages I- IV). Current bladder cancer or a hist. of bladder cancer. Uninvestigated macroscop. haematuria. Acute/chron. dis. which may cause tissue hypoxia such as cardiac or respirat. fail., recent MF, shock. Hepat. impair. Acute alcohol intoxicat., alcoholism. Any type of acute metabol. acidos. (e.g. lactic acidosis, diabet. ketoacidosis). Diabet. pre-coma. Severe renal fail. (GFR < 30 mL/min). Acute conditions: Dehydrat., Sev. infec., Shock, Intravasc. administ. of iodinated contrast agents., Breast-feed. 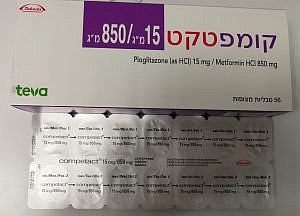 Indicated as second line treatment of type 2 diabetes mellitus adult patients, particularly overweight patients, who are unable to achieve sufficient glycaemic control at their maximally tolerated dose of oral metformin alone.
After initiation of therapy with pioglitazone, patients should be reviewed after 3 to 6 months to assess adequacy of response to treatment (e.g. reduction in HbA1c). In patients who fail to show an adequate response, pioglitazone should be discontinued. In light of potential risks with prolonged therapy, prescribers should confirm at subsequent routine reviews that the benefit of pioglitazone is maintained.

Hypersensitivity to the active substances or to any of the excipients; Cardiac failure or history of cardiac failure (NYHA stages I to IV); Current bladder cancer or a history of bladder cancer; Uninvestigated macroscopic haematuria; Acute or chronic disease which may cause tissue hypoxia such as cardiac or respiratory failure, recent myocardial infarction, shock; Hepatic impairment; Acute alcohol intoxication, alcoholism; Any type of acute metabolic acidosis (such as lactic acidosis, diabetic ketoacidosis); Diabetic pre-coma; Severe renal failure (GFR < 30 mL/min); Acute conditions with the potential to alter renal function such as: Dehydration, Severe infection, Shock; Intravascular administration of iodinated contrast agents; Breast-feeding.

Pregnancy: Competact should not be used during pregnancy. If a pregnancy occurs, treatment with Competact should be discontinued.
Lactation: Both pioglitazone and metformin have been shown to be present in the milk of lactating rats. It is not known whether breast-feeding will lead to exposure of the infant to the medicinal product. Competact must therefore not be used in women who are breast-feeding.
See prescribing information for full details.

In clinical studies, patients have taken pioglitazone at higher than the recommended highest dose of 45 mg daily. The maximum reported dose of 120 mg/day for four days, then 180 mg/day for seven days was not associated with any symptoms.
A large overdose of metformin (or coexisting risks of lactic acidosis) may lead to lactic acidosis which is a medical emergency and must be treated in hospital.
The most effective method to remove lactate and metformin is haemodialysis.

Storage: Store in a dry place below 25°C.