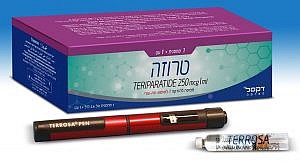 Hypersensitivity to the active substance or to any of the excipients. Reactions have included angioedema and anaphylaxis

Osteosarcoma
In male and female rats, teriparatide caused an increase in the incidence of osteosarcoma (a malignant bone tumor) that was dependent on dose and treatment duration. Terrosa should not be prescribed for patients at increased baseline risk of osteosarcoma.
These include:

Treatment Duration
The safety and efficacy of teriparatide have not been evaluated beyond 2 years of treatment. Consequently, use of the drug for more than 2 years during a patients’ lifetime is not recommended.
Bone Metastases and Skeletal Malignancies
Patients with bone metastases or a history of skeletal malignancies should not be treated with Terrosa.
Metabolic Bone Diseases
Patients with metabolic bone diseases other than osteoporosis should not be treated with Terrosa.
Hypercalcemia and Hypercalcemic Disorders
Teriparatide has not been studied in patients with pre-existing hypercalcemia. These patients should not be treated with Terrosa because of the possibility of exacerbating hypercalcemia. Patients known to have an underlying hypercalcemic disorder, such as primary hyperparathyroidism, should not be treated with Terrosa.
Urolithiasis or Pre-existing Hypercalciuria
In clinical trials, the frequency of urolithiasis was similar in patients treated with teriparatide and placebo. However, teriparatide has not been studied in patients with active urolithiasis. If active urolithiasis or pre-existing hypercalciuria are suspected, measurement of urinary calcium excretion should be considered. Terrosa should be used with caution in patients with active or recent urolithiasis because of the potential to exacerbate this condition.
Orthostatic Hypotension
Terrosa should be administered initially under circumstances in which the patient can sit or lie down if symptoms of orthostatic hypotension occur. In short-term clinical pharmacology studies with teriparatide, transient episodes of symptomatic orthostatic hypotension were observed in 5% of patients. Typically, an event began within 4 hours of dosing and spontaneously resolved within a few minutes to a few hours. When transient orthostatic hypotension occurred, it happened within the first several doses, it was relieved by placing the person in a reclining position, and it did not preclude continued treatment.
Drug Interactions
Hypercalcemia may predispose patients to digitalis toxicity. Because Terrosa transiently increases serum calcium, patients receiving digoxin should use Terrosa with caution.
See prescribing information for full details.

Hypercalcemia may predispose patients to digitalis toxicity. Because Terrosa transiently increases serum calcium, patients receiving digoxin should use Terrosa with caution.
Digoxin — In a study of 15 healthy people administered digoxin daily to steady state, a single teriparatide dose did not alter the effect of digoxin on the systolic time interval (from electrocardiographic Q-wave onset to aortic valve closure, a measure of digoxin’s calcium-mediated cardiac effect). However, sporadic case reports have suggested that hypercalcemia may predispose patients to digitalis toxicity. Because teriparatide may transiently increase serum calcium, teriparatide should be used with caution in patients taking digoxin.

Pregnancy:
There are no available data on teriparatide use in pregnant women to evaluate for drug-associated risk of major birth defects, miscarriage or adverse maternal or fetal outcomes. Consider discontinuing Terrosa when pregnancy is recognized.
In animal reproduction studies, teriparatide increased skeletal deviations and variations in mouse offspring at subcutaneous doses equivalent to more than 60 times the recommended 20 mcg human daily dose (based on body surface area, mcg/m2), and produced mild growth retardation and reduced motor activity in rat offspring at subcutaneous doses equivalent to more than 120 times the human dose. The background risk of major birth defects and miscarriage for the indicated population is unknown. The background risk in the US general population of major birth defects is 2% to 4% and of miscarriage is 15% to 20% of clinically recognized pregnancies.
Lactation
It is not known whether teriparatide is excreted in human milk, affects human milk production or has effects on the breastfed infant. Because of the potential for osteosarcoma shown with teriparatide in animal studies, advise patients that breastfeeding is not recommended during treatment with Terrosa.
See prescribing information for full details.

Incidents of overdose in humans have not been reported in clinical trials. Teriparatide has been administered in single doses of up to 100 mcg and in repeated doses of up to 60 mcg/day for 6 weeks. The effects of overdose that might be expected include a delayed hypercalcemic effect and risk of orthostatic hypotension. Nausea, vomiting, dizziness, and headache might also occur.
In postmarketing spontaneous reports, there have been cases of medication errors in which the entire contents (up to 800 mcg) of the teriparatide delivery device (pen) have been administered as a single dose. Transient events reported have included nausea, weakness/lethargy and hypotension. In some cases, no adverse events occurred as a result of the overdose. No fatalities associated with overdose have been reported.
Overdose Management — there is no specific antidote for teriparatide. Treatment of suspected overdose should include discontinuation of Terrosa, monitoring of serum calcium and phosphorus, and implementation of appropriate supportive measures, such as hydration.
See prescribing information for full details

Storage and Handling
Store in a refrigerator (2-8°C). Do not freeze. Keep the cartridge in the outer carton in order to protect from light.
After insertion of the cartridge into the pen, the combined pen and cartridge should be returned to the refrigerator immediately after use.
Do not store the injection device with the needle attached. Do not remove the cartridge from the pen during the 28 days of use.
Once opened, the product may be stored for a maximum of 28 days within its shelf life at 2-8°C.
The expiry date of the product is indicated on the packaging materials.
See prescribing information for full details.