Other sex hormones and modulators of the genital system. Prasterone 6.5 mg. PESSARIES: 28+ 6 vag. applicat. The recomm. dose is 6.5 mg prasterone (1 pess.) admin. once dly, at bedtime. the tmt. should be reassessed at least every 6 mnths. Missed dose, should be taken as soon as the pt. remembers. However, if the next dose is due in less than 8 hrs., the pt. should skip the missed pessary. Two pessar. should not be used to make up for a forgotten dose. See lit.
Treatment of vulvar and vaginal atrophy in postmenopaus. women having moder.-severe sympt.
C/I: Hypersens.
Undiagnosed genit. bleed.
Known, past or suspect. breast canc.
Known or suspect. oestrogen-dependent malig. tumours (e.g endomet.cancer).
Untreat. endomet. hyperplasia.
Acute liver dis., or a hist. of liver dis. as long as liver funct. tests have fail. to return to normal.
Previous/ current VT (DVT, PE).
Known thrombophilic disorders (e.g. protein C, protein S, or antithrombin defic.).
Active or recent arterial thromboemb. dis. (e.g. angina, MI).
Porphyria. 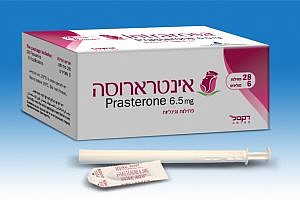 The recommended dose is 6.5 mg prasterone (one pessary) administered once daily, at bedtime.
For the treatment of postmenopausal symptoms, Intrarosa should only be initiated for symptoms that adversely affect quality of life. In all cases, a careful appraisal of the risks and benefits should be reassessed at least every 6 months and Intrarosa should only be continued as long as the benefit outweighs the risk.
If a dose is forgotten, it should be taken as soon as the patient remembers. However, if the next dose is due in less than 8 hours, the patient should skip the missed pessary. Two pessaries should not be used to make up for a forgotten dose.

Intrarosa is indicated for the treatment of vulvar and vaginal atrophy in postmenopausal women having moderate to severe symptoms.

Concomitant use with systemic hormone replacement therapy (oestrogen-only or oestrogen- progestagen combination or androgen treatment) or vaginal oestrogens has not been investigated and is therefore not recommended.

In the event of overdose, vaginal douching is recommended.