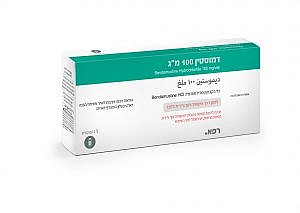 No in-vivo interaction studies have been performed.
When Demustin is combined with myelosuppressive agents, the effect of Demustin and/or the co-administered medicinal products on the bone marrow may be potentiated. Any treatment reducing the patient’s performance status or impairing bone marrow function can increase the toxicity of Demustin.
Combination of Demustin with cyclosporine or tacrolimus may result in excessive immunosuppression with risk of lymphoproliferation.
Cytostatics can reduce antibody formation following live-virus vaccination and increase the risk of infection which may lead to fatal outcome. This risk is increased in subjects who are already immunosuppressed by their underlying disease.
Bendamustine metabolism involves cytochrome P450 (CYP) 1A2 isoenzyme. Therefore, the potential for interaction with CYP1A2 inhibitors such as fluvoxamine, ciprofloxacin, acyclovir and cimetidine exists.
Paediatric population: Interaction studies have only been performed in adults.

Pregnancy: There are insufficient data from the use of Demustin in pregnant women. In nonclinical studies bendamustine hydrochloride was embryo-/fetolethal, teratogenic and genotoxic. During pregnancy Demustin
should not be used unless clearly necessary. The mother should be informed about the risk to the foetus. If treatment with Demustin is absolutely necessary during pregnancy or if pregnancy occurs during treatment, the patient should be informed about the risks for the unborn child and be monitored carefully. The possibility of genetic counselling should be considered.
Lactation: It is not known whether bendamustine passes into the breast milk, therefore, Demustin is contraindicated during breast feeding. Breast feeding must be discontinued during treatment with Demustin.

After application of a 30 min infusion of bendamustine once every 3 weeks the maximum tolerated dose (MTD) was 280 mg/m². Cardiac events of CTC grade 2 which were compatible with ischaemic ECG changes occurred which were regarded as dose limiting.
In a subsequent study with a 30 min infusion of bendamustine at day 1 and 2 every 3 weeks the MTD was found to be 180 mg/m². The dose limiting toxicity was grade 4 thrombocytopenia. Cardiac toxicity was not dose limiting with this schedule.
Counter measures: There is no specific antidote. Bone marrow transplantation and transfusions (platelets, concentrated erythrocytes) may be made or haematological growth factors may be given as effective countermeasures to control haematological side effects.
Bendamustine hydrochloride and its metabolites are dialyzable to a small extent.