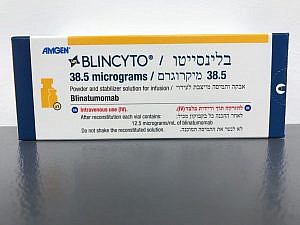 Hypersensitivity to the active substance or to any of the excipients. Breast-feeding.

Neurologic events: Neurologic events including events with a fatal outcome have been observed. Grade 3 (CTCAE version 4.0) or higher (severe or life-threatening) neurologic events following initiation of blinatumomab administration included encephalopathy, seizures, speech disorders, disturbances in consciousness, confusion and disorientation, and coordination and balance disorders. The median time from initiation of blinatumomab to onset of a neurologic event was 9 days. The majority of events resolved after treatment interruption.
Elderly patients experienced a higher rate of neurological toxicities, including cognitive disorder, encephalopathy, and confusion. Patients with a medical history of neurologic signs and symptoms (such as dizziness, hypoesthesia, hyporeflexia, tremor, dysesthesia, paresthesia, memory impairment) demonstrated a higher rate of neurologic events (such as tremor, dizziness, confusional state, encephalopathy and ataxia). The median time to onset of a neurologic event in these patients was 12 days.
Blincyto is indicated for treatment of adult patients with Philadelphia chromosome-negative relapsed or refractory B‑cell precursor acute lymphoblastic leukemia (ALL) with no CNS involvement.
There is a possibility of a higher risk of neurologic events in patients with a history or presence of clinically relevant central nervous system (CNS) pathology (e.g. epilepsy, seizure, paresis, aphasia, stroke, severe brain injuries, dementia, Parkinson’s disease, cerebellar disease, organic brain syndrome, psychosis). There is limited experience in these patients as they were excluded from clinical trials. There is limited experience with blinatumomab in patients with documented active ALL in the CNS or cerebrospinal fluid (CSF). However patients have been treated with blinatumomab in clinical studies after clearance of CSF blasts with CNS directed therapy (such as intrathecal chemotherapy). Therefore once the CSF is cleared, treatment with blinatumomab may be initiated.
Infections: In patients receiving blinatumomab, serious infections, including sepsis, pneumonia, bacteremia, opportunistic infections and catheter site infections have been observed, some of which were life‑threatening or fatal. Patients with Eastern Cooperative Oncology Group (ECOG) performance status at baseline of 2 experienced a higher incidence of serious infections compared to patients with ECOG performance status of < 2. There is limited experience with blinatumomab in patients with an active uncontrolled infection.
Tumor lysis syndrome: Tumor lysis syndrome (TLS), which may be life-threatening or fatal (grade ≥ 4) has been observed in patients receiving blinatumomab.
Appropriate prophylactic measures including aggressive hydration and anti-hyperuricaemia therapy (such as allopurinol or rasburicase) should be used for the prevention and treatment of TLS during blinatumomab treatment, especially in patients with higher leukocytosis or a high tumour burden. Patients should be closely monitored for signs or symptoms of TLS, including renal function and fluid balance in the first 48 hours after the first infusion. In clinical studies, patients with moderate renal impairment showed an increased incidence of TLS compared with patients with mild renal impairment or normal renal function. Management of these events may require either temporary interruption or discontinuation of blinatumomab.
Neutropenia and febrile neutropenia: Neutropenia and febrile neutropenia, including life-threatening cases, have been observed in patients receiving blinatumomab. Laboratory parameters (including, but not limited to white blood cell count and absolute neutrophil count) should be monitored routinely during blinatumomab infusion, especially during the first 9 days of the first cycle, and treated appropriately.
Elevated liver enzymes: Treatment with blinatumomab was associated with transient elevations in liver enzymes. The majority of the events were observed within the first week of treatment initiation and did not require interruption or discontinuation of blinatumomab.
Pancreatitis: Pancreatitis, life-threatening or fatal, has been reported in patients receiving blinatumomab in clinical trials and the post-marketing setting. High-dose steroid therapy may have contributed, in some cases, to the pancreatitis. Evaluate patients who develop signs and symptoms of pancreatitis. Management of pancreatitis may require either temporary interruption or discontinuation of blinatumomab.
Leukoencephalopathy including progressive multifocal leukoencephalopathy: Cranial magnetic resonance imaging (MRI) changes showing leukoencephalopathy have been observed in patients receiving blinatumomab, especially in patients with prior treatment with cranial irradiation and anti-leukemic chemotherapy (including systemic high dose methotrexate or intrathecal cytarabine). The clinical significance of these imaging changes is unknown.
See prescribing information for full details.

No formal drug interaction studies have been performed. Results from an in vitro test in human hepatocytes suggest that blinatumomab did not affect CYP450 enzyme activities.
Initiation of BLINCYTO treatment causes transient release of cytokines during the first days of treatment that may suppress CYP450 enzymes. Patients who are receiving medicinal products that are CYP450 and transporter substrates with a narrow therapeutic index should be monitored for adverse effects (e.g. warfarin) or drug concentrations (e.g. cyclosporine) during this time. The dose of the concomitant medicinal product should be adjusted as needed.

Pregnancy: There are no data from the use of blinatumomab in pregnant women. Blinatumomab should not be used during pregnancy unless the potential benefit outweighs the potential risk to the fetus.
Women of childbearing potential have to use effective contraception during and for at least 48 hours after treatment with blinatumomab.
In case of exposure during pregnancy, depletion of B-cells may be expected in newborns due to the pharmacological properties of the product. Consequently, newborns should be monitored for B-cell depletion and vaccinations with live virus vaccines should be postponed until the infant’s B-cell count has recovered.
Lactation: It is unknown whether blinatumomab or metabolites are excreted in human milk. Based on its pharmacological properties, a risk to the suckling child cannot be excluded. Consequently, as a precautionary measure, breast-feeding is contra-indicated during and for at least 48 hours after treatment with blinatumomab.
See prescribing information for full details.

Overdoses have been observed including one patient who received 133-fold the recommended therapeutic dose of BLINCYTO delivered over a short duration. Overdoses resulted in adverse reactions which were consistent with the reactions observed at the recommended therapeutic dose and included fever, tremors, and headache. In the event of overdose, the infusion should be temporarily interrupted and patients should be monitored. Reinitiation of BLINCYTO at the correct therapeutic dose should be considered when all toxicities have resolved and no earlier than 12 hours after interruption of the infusion.

Storage: Store and transport refrigerated (2°C – 8°C). Do not freeze. Store the vials in the original package in order to protect from light. After removal from the refrigerator, this drug may be stored at room temperature (23-27°C) and used within 8 hours.