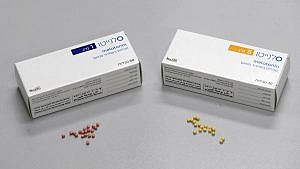 The recommended starting dose is 2 mg. If an inadequate response has been observed, the dose should be increased to 5 mg, with a maximal dose of 10 mg.
The drug should be taken once daily, 0.5-1 hour before bedtime and with or after food.
Data are available for up to 2 years’ treatment. The patient should be monitored at regular intervals (at least every 6 months) to check that melatonin is still the most appropriate treatment. After at least 3 months of treatment, the physician should evaluate the treatment effect and consider stopping treatment if no clinically relevant treatment effect is seen. If a lower treatment effect is seen after titration to a higher dose, the prescriber should first consider a down-titration to a lower dose before deciding on a complete discontinuation of treatment.
If a tablet is forgotten, it could be taken before the patient goes to sleep that night, but after this time, no other tablet should be given before the next scheduled dose.
Special populations
Renal impairment
The effect of any stage of renal impairment on melatonin pharmacokinetics has not been studied. Caution should be used when melatonin is administered to patients with renal impairment.
Hepatic impairment
There is no experience of the use of melatonin in patients with liver impairment. Therefore, melatonin is not recommended for use in patients with hepatic impairment.
Paediatric population (under 2 years of age)
There is no relevant use of melatonin in children aged 0 to 2 years for the treatment of insomnia.
Method of administration
Oral use. Tablets should be swallowed whole. The tablet should not be broken, crushed or chewed because it will lose the prolonged release properties.
Tablets can be put into food such as yoghurt, orange juice or ice-cream to facilitate swallowing and improve compliance. If the tablets are mixed with food or drink, they should be taken immediately and the mixture not stored.

For the treatment of insomnia in children and adolescents aged 2-18 with Autism Spectrum Disorder (ASD) and / or Smith-Magenis syndrome, where sleep hygiene measures have been insufficient.

Drowsiness
Melatonin may cause drowsiness. Therefore the medicinal product should be used with caution if the effects of drowsiness are likely to be associated with a risk to safety.
Autoimmune diseases
No clinical data exist concerning the use of melatonin in individuals with autoimmune diseases. Therefore, melatonin is not recommended for use in patients with autoimmune diseases.
Interactions with other medicines
Concomitant use with fluvoxamine, alcohol, benzodiazepines/non-benzodiazepines hypnotics, thioridazine and imipramine is not recommended.
Lactose
Contains lactose. Patients with rare hereditary problems of galactose intolerance, total lactase deficiency or glucose-galactose malabsorption should not take this medicine.

Interaction studies have only been performed in adults. In the absence of specific studies in children, the drug interactions with melatonin are those known in adults. Melatonin’s metabolism is mainly mediated by CYP1A enzymes. Therefore, interactions between melatonin and other active substances as a consequence of their effect on CYP1A enzymes is possible.
Concomitant use of the following medicinal products is not recommended:

Fluvoxamine
Fluvoxamine increases melatonin levels (by 17-fold higher AUC and a 12-fold higher serum Cmax) by inhibiting its metabolism by hepatic cytochrome P450 (CYP) isozymes CYP1A2 and CYP2C19. The combination should be avoided.
Alcohol
Alcohol should not be taken with melatonin, because it reduces the effectiveness of melatonin on sleep.
Benzodiazepines/non-benzodiazepine hypnotics
Melatonin may enhance the sedative properties of benzodiazepines and non-benzodiazepine hypnotics, such as zaleplon, zolpidem and zopiclone. In a clinical trial, there was clear evidence for a transitory pharmacodynamic interaction between melatonin and zolpidem one hour following co-dosing. Concomitant administration resulted in increased impairment of attention, memory and co-ordination compared to zolpidem alone. Combination with benzodiazepines and non-benzodiazepine hypnotics should be avoided.
Thioridazine and imipramine
Melatonin has been co-administered in studies with thioridazine and imipramine, active substances which affect the central nervous system. No clinically significant pharmacokinetic interactions were found in each case. However, melatonin co-administration resulted in increased feelings of tranquility and difficulty in performing tasks compared to imipramine alone, and increased feelings of “muzzyheadedness” compared to thioridazine alone. Combination with thioridazine and imipramine should be avoided.
Concomitant use to be considered with caution
5- or 8-methoxypsoralen
Caution should be exercised in patients on 5- or 8-methoxypsoralen (5 or 8-MOP), which increases melatonin levels by inhibiting its metabolism.
Cimetidine
Caution should be exercised in patients on cimetidine which is a potent inhibitor of certain cytochrome P450 (CYP450) enzymes, mainly CYP1A2 and thereby increases plasma melatonin levels, by inhibiting its metabolism.
Oestrogens
Caution should be exercised in patients on oestrogens (e.g. contraceptive or hormone replacement therapy), which increase melatonin levels by inhibiting its metabolism by CYP1A1 and CYP1A2.
CYP1A2 inhibitors
CYP1A2 inhibitors such as quinolones (ciprofloxacin and norfloxacin) may give rise to increased melatonin exposure.
CYP1A2 inducers
CYP1A2 inducers such as carbamazepine and rifampicin may reduce plasma concentrations of melatonin. Therefore, when CYP1A2 inducers and melatonin are both given, dose adjustment may be required.
Smoking
Smoking is known to induce CYP1A2 metabolism, therefore if patients stop or start smoking during treatment with melatonin, dose adjustment may be required.
NSAIDs
Prostaglandin synthesis inhibitors (NSAIDs) such as acetylsalicylic acid and ibuprofen, given in the evening may suppress endogenous melatonin levels in the early part of the night by up to 75%. If possible, administration of NSAIDs should be avoided in the evening.
Beta-blockers
Beta-blockers may supress the night-time release of endogenous melatonin and thus should be administered in the morning.

Pregnancy
There are no data from the use of melatonin in pregnant women. Animal studies do not indicate reproductive toxicity. As a precautionary measure, it is preferable to avoid the use of melatonin during pregnancy.
Lactation
Endogenous melatonin was measured in human breast milk thus exogenous melatonin is probably secreted into human milk. Data in animals indicate maternal transfer of melatonin to the foetus via the placenta or in the milk. The effect of melatonin on newborns/infants is unknown. A decision must be made whether to discontinue breast-feeding or to discontinue/abstain from
melatonin therapy taking into account the benefit of breast feeding for the child and the benefit of therapy for the woman.
Fertility
In studies performed in both adult and juvenile animals, melatonin had no effect on male or female fertility.

If overdose occurs, drowsiness is to be expected. Clearance of the active substance is expected within 12 hours after ingestion. No special treatment is required.

Melatonin has a moderate influence on the ability to drive and use machines.
Melatonin may cause drowsiness, therefore melatonin should be used with caution if the effects of drowsiness are likely to be associated with a risk to safety.