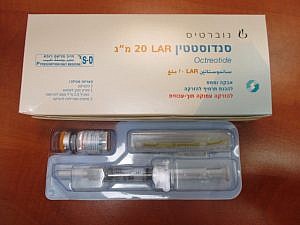 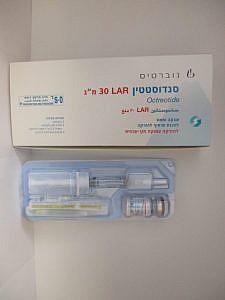 Treatment of acromegaly in: Patients already adequately controlled on standard doses of sandostatin s.c. Patients in whom surgery or radiotherapy are inappropriate or ineffective, or who are in the latency period before radiotherapy becomes fully effective.
Endocrine Gastro-Entero-Pancreatic (GEP) tumors, carcinoid tumors.

Known hypersensitivity to octreotide or to any of the excipients.

General: As GH-secreting pituitary tumours may sometimes expand, causing serious complications (e.g. visual field defects), it is essential that all patients be carefully monitored. If evidence of tumour expansion appears, alternative procedures are advisable. The therapeutic benefits of a reduction in growth hormone (GH) levels and normalization of insulin-like growth factor 1 (IGF-1) concentration in female acromegalic patients could potentially restore fertility. Female patients of childbearing potential should be advised to use adequate contraception if necessary during treatment with octreotide. Thyroid function should be monitored in patients receiving prolonged treatment with octreotide.
Hepatic function should be monitored during octreotide therapy.
Cardiovascular related events: Common cases of bradycardia have been reported. Dose adjustments of drugs such as beta-blockers, calcium channel blockers, or agents to control fluid and electrolyte balance, may be necessary.
Gallbladder and related events: Development of gallstones has been reported in 15 to 30% of long-term recipients of s.c. Sandostatin. The prevalence in the general population (aged 40 to 60 years) is about 5 to 20%. Long-term exposure to Sandostatin LAR of patients with acromegaly or gastro-enteropancreatic tumours suggests that treatment with Sandostatin LAR does not increase the incidence of gallstone formation, compared with s.c. treatment. Ultrasonic examination of the gallbladder before and at about 6 monthly intervals during Sandostatin LAR therapy is however recommended. If gallstones do occur, they are usually asymptomatic; symptomatic stones should be treated either by dissolution therapy with bile acids or by surgery.
Glucose metabolism: Because of its inhibitory action on growth hormone, glucagon and insulin release, Sandostatin LAR may affect glucose regulation. Post-prandial glucose tolerance may be impaired. As reported for patients treated with s.c. Sandostatin, in some instances, a state of persistent hyperglycaemia may be induced as a result of chronic administration. In patients with concomitant Type I diabetes mellitus, Sandostatin LAR is likely to affect glucose regulation, and insulin requirements may be reduced. In non-diabetics and type II diabetics with partially intact insulin reserves, Sandostatin s.c. administration may result in increases in post-prandial glycaemia. It is therefore recommended to monitor glucose tolerance and antidiabetic treatment. In patients with insulinomas, octreotide, because of its greater relative potency in inhibiting the secretion of GH and glucagon than that of insulin, and because of the shorter duration of its inhibitory action on insulin, may increase the depth and prolong the duration of hypoglycaemia. These patients should be closely monitored.
Nutrition: Octreotide may alter absorption of dietary fats in some patients. Depressed vitamin B12 levels and abnormal Schilling’s tests have been observed in some patients receiving octreotide therapy. Monitoring of vitamin B12 levels is recommended during therapy with Sandostatin LAR in patients who have a history of vitamin B12 deprivation.

Dose adjustment of medicinal products such as beta blockers, calcium channel blockers, or agents to control fluid and electrolyte balance may be necessary when Sandostatin LAR is administered concomitantly.
Dose adjustments of insulin and antidiabetic medicinal products may be required when Sandostatin LAR is administered concomitantly.
Octreotide has been found to reduce the intestinal absorption of ciclosporin and to delay that of cimetidine.
Concomitant administration of octreotide and bromocriptine increases the bioavailability of bromocriptine.
Limited published data indicate that somatostatin analogues might decrease the metabolic clearance of compounds known to be metabolised by cytochrome P450 enzymes, which may be due to the suppression of growth hormone. Since it cannot be excluded that octreotide may have this effect, other drugs mainly metabolised by CYP3A4 and which have a low therapeutic index (e.g. quinidine,
terfenadine) should therefore be used with caution.

Pregnancy: There is a limited amount of data (less than 300 pregnancy outcomes) from the use of octreotide in pregnant women, and in approximately one third of the cases the pregnancy outcomes are unknown.
The majority of reports were received after post-marketing use of octreotide and more than 50% of exposed pregnancies were reported in patients with acromegaly. Most women were exposed to octreotide during the first trimester of pregnancy at doses ranging from 100-1200 micrograms/day of Sandostatin s.c. or 10-40 mg/month of Sandostatin LAR. Congenital anomalies were  eported in about 4% of pregnancy cases for which the outcome is known. No causal relationship to octreotide is suspected for these cases.
Animal studies do not indicate direct or indirect harmful effects with respect to reproductive toxicity.
As a precautionary measure, it is preferable to avoid the use of Sandostatin LAR during pregnancy.
Lactation: It is unknown whether octreotide is excreted in human breast milk. Animal studies have shown excretion of octreotide in breast milk. Patients should not breast-feed during Sandostatin treatment.

Incompatibilities: In the absence of compatibility studies, this medicinal product must not be mixed with other medicinal products.
Storage: Store at 2°C to 8°C (in a refrigerator). Keep vial in the outer carton in order to protect it from light. Sandostatin LAR can remain below 25°C on the day of injection. However, the suspension must only be prepared immediately prior to i.m. injection.