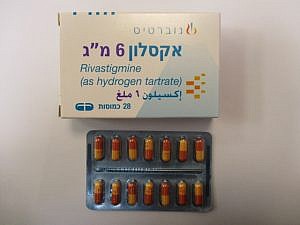 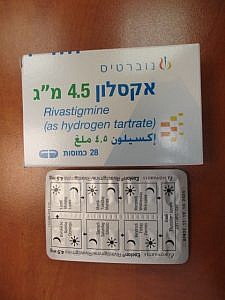 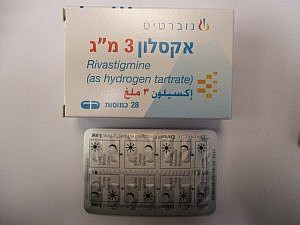 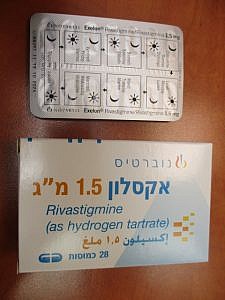 Administration: Exelon hard capsules should be administered twice a day, with morning and evening meals.
Initial dose: 1.5 mg twice a day. Patients known to be particularly sensitive to the effects of cholinergic drugs should be started at a dose of 1 mg twice a day.
Dose titration: The starting dose is 1.5 mg twice a day. If this dose is well tolerated after a minimum of two weeks of treatment, the dose may be increased to 3 mg twice a day. Subsequent increases to 4.5 mg and then 6 mg twice a day should also be based on good tolerability of the current dose and may be considered after a minimum of two weeks’ treatment at that dose level.  If adverse effects (e.g. nausea, vomiting, abdominal pain or loss of appetite) or weight decrease are observed during treatment, these may respond to omitting one or more doses. If adverse effects persist, the daily dose should be reduced to the previous well-tolerated dose.
Maintenance dose: 1.5 mg to 6 mg twice a day; to achieve maximum therapeutic benefit patients should be maintained on their highest well-tolerated dose.
Re-initiation of therapy: The incidence and severity of adverse events are generally increased with higher doses. If treatment is interrupted for longer than several days, treatment should be re-initiated with 1.5 mg twice daily and titrated as described above.
Special population
Paediatric patients: Children and adolescents (age below 18 years):The use of Exelon in children has not been studied and is therefore not recommended.
Renal impairment or hepatic impairment: No dose adjustment is necessary in patients with renal or hepatic impairment. However, due to increased exposure in moderate renal and mild to moderate hepatic impairment, dosing recommendations to titrate according to individual tolerability should be closely followed as patients with clinically significant renal or hepatic impairment might experience more adverse events. Patients with severe liver impairment have not been studied, however, Exelon capsules may be used in this patient population provided close monitoring is exercised.

The use of Exelon is contraindicated in patients with: Known hypersensitivity to rivastigmine, to other carbamate derivatives or to the excipients of the formulation. Previous history of application site reactions suggestive of allergic contact dermatitis with rivastigmine transdermal patch.

The incidence and severity of adverse reactions generally increase with higher doses. If treatment is interrupted for more than three days, it should be re-initiated at 1.5 mg twice daily to reduce the possibility of adverse reactions (e.g. vomiting).
Skin application site reactions may occur with rivastigmine patch and are usually mild or moderate in intensity. These reactions are not in themselves an indication of sensitisation. However, use of rivastigmine patch may lead to allergic contact dermatitis.
Allergic contact dermatitis should be suspected if application site reactions spread beyond the patchsize, if there is evidence of a more intense local reaction (e.g. increasing erythema, oedema, papules, vesicles) and if symptoms do not significantly improve within 48 hours after patch removal. In these cases, treatment should be discontinued.
Patients who develop application site reactions suggestive of allergic contact dermatitis to rivastigmine patch and who still require rivastigmine treatment should only be switched to oral rivastigmine after negative allergy testing and under close medical supervision. It is possible that some patients sensitised to rivastigmine by exposure to rivastigmine patch may not be able to take rivastigmine in any form.
There have been rare post-marketing reports of patients experiencing allergic dermatitis (disseminated) when administered rivastigmine irrespective of the route of administration (oral, transdermal). In these cases, treatment should be discontinued.
Patients and caregivers should be instructed accordingly.
Dose titration: Adverse reactions (e.g. hypertension and hallucinations in patients with Alzheimer’s dementia and worsening of extrapyramidal symptoms, in particular tremor, in patients with dementia associated with Parkinson’s disease) have been observed shortly after dose increase. They may respond to a dose reduction. In other cases, Exelon has been discontinued.
Gastrointestinal disorders such as nausea, vomiting and diarrhoea are dose-related, and may occur particularly when initiating treatment and/or increasing the dose. These adverse reactions occur more commonly in women. Patients who show signs or symptoms of dehydration resulting from prolonged vomiting or diarrhoea can be managed with intravenous fluids and dose reduction or discontinuation if recognised and treated promptly. Dehydration can be associated with serious outcomes.
Patients with Alzheimer’s disease may lose weight. Cholinesterase inhibitors, including rivastigmine, have been associated with weight loss in these patients. During therapy patient’s weight should be monitored.
In case of severe vomiting associated with rivastigmine treatment, appropriate dose adjustments as recommended in section 4.2 at the attached doctor’s leaflet must be made. Some cases of severe vomiting were associated with oesophageal rupture. Such events appeared to occur particularly after dose increments or high doses of rivastigmine.
Rivastigmine may cause bradycardia which constitutes a risk factor in the occurrence of torsade de pointes, predominantly in patients with risk factors. Caution is advised in patients at higher risk of developing torsade de pointes; for example, those with uncompensated heart failure, recent myocardial infarction, bradyarrhythmias, a predisposition to hypokalaemia or hypomagnesaemia, or concomitant use with medicinal products known to induce QT prolongation and/or torsade de pointes.
Care must be taken when using rivastigmine in patients with sick sinus syndrome or conduction defects (sino-atrial block, atrio-ventricular block).
Rivastigmine may cause increased gastric acid secretions. Care should be exercised in treating patients with active gastric or duodenal ulcers or patients predisposed to these conditions.
Cholinesterase inhibitors should be prescribed with care to patients with a history of asthma or obstructive pulmonary disease.
Cholinomimetics may induce or exacerbate urinary obstruction and seizures. Caution is recommended in treating patients predisposed to such diseases.
The use of rivastigmine in patients with severe dementia of Alzheimer’s disease or associated with Parkinson’s disease, other types of dementia or other types of memory impairment (e.g. age-related cognitive decline) has not been investigated and therefore use in these patient populations is not recommended.
Like other cholinomimetics, rivastigmine may exacerbate or induce extrapyramidal symptoms. Worsening (including bradykinesia, dyskinesia, gait abnormality) and an increased incidence or severity of tremor have been observed in patients with dementia associated with Parkinson’s disease. These events led to the discontinuation of rivastigmine in some cases (e.g. discontinuations due to tremor 1.7% on rivastigmine vs 0% on placebo). Clinical monitoring is recommended for these adverse reactions.
Special populations: Patients with clinically significant renal or hepatic impairment might experience more adverse reactions. Dosing recommendations to titrate according to individual tolerability must be closely followed. Patients with severe hepatic impairment have not been studied. However, Exelon may be used in this patient population and close monitoring is necessary.
Patients with body weight below 50 kg may experience more adverse reactions and may be more likely to discontinue due to adverse reactions.

The most commonly reported adverse drug reactions (ADRs) are gastrointestinal, including nausea (38%) and vomiting (23%), especially during titration. Female patients in clinical studies were found to be more susceptible to gastrointestinal adverse reactions and weight loss.
See prescribing information for full details.

As a cholinesterase inhibitor, rivastigmine may exaggerate the effects of succinylcholine-type muscle relaxants during anaesthesia. Caution is recommended when selecting anaesthetic agents. Possible dose adjustments or temporarily stopping treatment can be considered if needed.
In view of its pharmacodynamic effects and possible additive effects, rivastigmine should not be given concomitantly with other cholinomimetic substances. Rivastigmine might interfere with the activity of anticholinergic medicinal products (e.g oxybutynin, tolterodine).
Additive effects leading to bradycardia (which may result in syncope) have been reported with the combined use of various beta-blockers (including atenolol) and rivastigmine. Cardiovascular beta blockers are expected to be associated with the greatest risk, but reports have also been received in patients using other beta-blockers. Therefore, caution should be exercised when rivastigmine is combined with beta-blockers and also other bradycardia agents (e.g. class III antiarrhythmic agents, calcium channel antagonists, digitalis glycoside, pilocarpin).
Since bradycardia constitutes a risk factor in the occurrence of torsades de pointes, the combination of rivastigmine with torsades de pointes-inducing medicinal products such as antipsychotics i.e. some phenothiazines (chlorpromazine, levomepromazine), benzamides (sulpiride, sultopride, amisulpride, tiapride, veralipride), pimozide, haloperidol, droperidol, cisapride, citalopram, diphemanil, erythromycin IV, halofantrin, mizolastin, methadone, pentamidine and moxifloxacine should be observed with caution and clinical monitoring (ECG) may also be required.
No pharmacokinetic interaction was observed between rivastigmine and digoxin, warfarin, diazepam or fluoxetine in studies in healthy volunteers. The increase in prothrombin time induced by warfarin is not affected by administration of rivastigmine. No untoward effects on cardiac conduction were observed following concomitant administration of digoxin and rivastigmine.
According to its metabolism, metabolic interactions with other medicinal products appear unlikely, although rivastigmine may inhibit the butyrylcholinesterase mediated metabolism of other substances.

Symptoms: Most cases of accidental overdose have not been associated with any clinical signs or symptoms and almost all of the patients concerned continued rivastigmine treatment 24 hours after the overdose.
Cholinergic toxicity has been reported with muscarinic symptoms that are observed with moderate poisonings such as miosis, flushing, digestive disorders including abdominal pain, nausea, vomiting and diarrhoea, bradycardia, bronchospasm and increased bronchial secretions, hyperhidrosis, involuntary urination and/or defecation, lacrimation, hypotension and salivary hypersecretion.
In more severe cases, nicotinic effects might develop such as muscular weakness, fasciculations, seizures and respiratory arrest with possible fatal outcome.
Additionally there have been post-marketing cases of dizziness, tremor, headache, somnolence, confusional state, hypertension, hallucinations and malaise.
Management: As rivastigmine has a plasma half-life of about 1 hour and a duration of acetylcholinesterase inhibition of about 9 hours, it is recommended that in cases of asymptomatic overdose no further dose of rivastigmine should be administered for the next 24 hours. In overdose accompanied by severe nausea and vomiting, the use of antiemetics should be considered. Symptomatic treatment for other adverse reactions should be given as necessary.
In massive overdose, atropine can be used. An initial dose of 0.03 mg/kg intravenous atropine sulphate is recommended, with subsequent doses based on clinical response. Use of scopolamine as an antidote is not recommended.