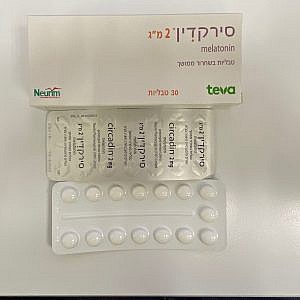 The recommended dose is 2 mg once daily, 1-2 hours before bedtime and after food. This dosage may be continued for up to thirteen weeks.
Paediatric population: The safety and efficacy of Circadin in children aged 0 to 18 years has not yet been established. No data are available.
Renal impairment: The effect of any stage of renal impairment on melatonin pharmacokinetics has not been studied.
Caution should be used when melatonin is administered to such patients.
Hepatic impairment: There is no experience of the use of Circadin in patients with liver impairment. Published data demonstrates markedly elevated endogenous melatonin levels during daytime hours due to decreased clearance in patients with hepatic impairment. Therefore, Circadin is not recommended for use in patients with hepatic impairment.
Method of Administration: Oral use. Tablets should be swallowed whole to maintain prolonged release properties. Crushing or chewing should not be used to facilitate swallowing.

Short-term treatment of primary insomnia characterized by poor quality of sleep in patients who are aged 55 or over.

Circadin may cause drowsiness. Therefore the product should be used with caution if the effects of drowsiness are likely to be associated with a risk to safety.
No clinical data exist concerning the use of Circadin in individuals with autoimmune diseases.
Therefore, Circadin is not recommended for use in patients with autoimmune diseases.
Circadin contains lactose. Patients with rare hereditary problems of galactose intolerance, the LAPP lactase deficiency or glucose-galactose malabsorption should not take this medicine.

The most common adverse reactions were headache, nasopharyngitis, back pain, and arthralgia, which were common, by MedDRA definition, in both the Circadin and placebo treated groups.
See prescribing information for full details.

Pregnancy: For melatonin, no clinical data on exposed pregnancies are available. Animal studies do not indicate direct or indirect harmful effects with respect to pregnancy, embryonal/foetal development, parturition
or postnatal development. In view of the lack of clinical data, use in pregnant
women and by women intending to become pregnant is not recommended.
Lactation: Endogenous melatonin was measured in human breast milk thus exogenous melatonin is probably secreted into human milk. There are data in animal models including rodents, sheep, bovine and primates that indicate maternal transfer of melatonin to the foetus via the placenta or in the milk.
Therefore, breast-feeding is not recommended in women under treatment with melatonin.

Several cases of overdose have been reported post-marketing. Somnolence was the most reported adverse event. Most were mild to moderate in severity. Circadin has been administered at 5 mg daily doses in clinical trials over 12 months without significantly changing the nature of the adverse reactions reported.
Administration of daily doses of up to 300 mg of melatonin without causing clinically significant adverse reactions have been reported in the literature.
If overdose occurs, drowsiness is to be expected. Clearance of the active substance is expected within 12 hours after ingestion. No special treatment is required.

Shelf life: 3 years.
Storage: Do not store above 25°C. Store in the original package in order to protect from light.