Monoclonal Antibody. Belimumab 200 mg. PRE-FILL. PEN (sol. for S.C. inj.): 1, 4×200mg/ml.
PRE-FILL.SYR. (sol. for S.C. inj.): 1, 4×200mg/ml.
Benlysta 200mg/ml: 200 mg once wkly., admin. S.C. dosing is not based on weight.
The pt’s. condition should be evaluat. continuous. Discont. of tmt. should be consid. if there is no improv. in dis.  control after 6 mnths. of tmt.
If a dose is missed, it should be admin. as soon as possible. Thereafter, pts. can resume dosing on their usual day of admin., or start a new wkly.
Transit. from IV to S.C. admin.: If a pt. is being transitioned from IV admin. to S.C. admin., the 1st S.C. inj. should be admin. 1-4 wks. after the last IV dose. See lit.
Indic. as add-on ther. in adult pts. with active, autoantibody-posit. system. lupus erythematosus (SLE) with a high degree of dis. activity (e.g., positive anti-dsDNA and low complement) despite standard ther.
C/I: Hypersens. 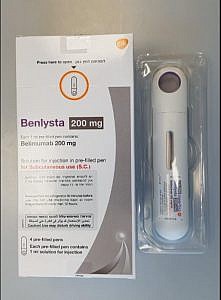 Benlysta treatment should be initiated and supervised by a qualified physician experienced in the diagnosis and treatment of SLE. It is recommended that the first subcutaneous injection of Benlysta should be under the supervision of a healthcare professional in a setting that is sufficiently qualified to manage hypersensitivity reactions, if necessary. The healthcare professional must provide proper training in subcutaneous technique and education about signs and symptoms of hypersensitivity reactions. A patient may self-inject or the patient caregiver may administer Benlysta after the healthcare professional determines that it is appropriate.
Posology: The recommended dose is 200 mg once weekly, administered subcutaneously. Dosing is not based on weight.
The patient’s condition should be evaluated continuously. Discontinuation of treatment with Benlysta should be considered if there is no improvement in disease control after 6 months of treatment.
If a dose is missed, it should be administered as soon as possible. Thereafter, patients can resume dosing on their usual day of administration, or start a new weekly schedule from the day that the missed dose was administered. It is not necessary to administer two doses on the same day.
If patients wish to change their weekly dosing day, a new dose can be given on the newly preferred day of the week. Thereafter the patient should continue with the new weekly schedule from that day, even if the dosing interval may be temporarily less than a week.
Transition from intravenous to subcutaneous administration: If a patient is being transitioned from Benlysta intravenous administration to subcutaneous
administration, the first subcutaneous injection should be administered 1 to 4 weeks after the last intravenous dose.
Elderly: The efficacy and safety of Benlysta in the elderly has not been established. Data on patients ≥65 years are limited to <1.8% of the studied population. Therefore, the use of Benlysta in elderly patients is not recommended unless the benefits are expected to outweigh the risks. In case administration of Benlysta to elderly patients is deemed necessary, dose adjustment is not required.
Renal impairment: Belimumab has been studied in a limited number of SLE patients with renal impairment. On the basis of the available information, dose adjustment is not required in patients with mild, moderate or severe renal impairment. Caution is however recommended in patients with severe renal impairment due to the lack of data.
Hepatic impairment: No specific studies with Benlysta have been conducted in patients with hepatic impairment.
Patients with hepatic impairment are unlikely to require dose adjustment.
Paediatric population: The safety and efficacy of Benlysta in children and adolescents (< 18 years of age) has not been established. No data are available.
Method of administration: The pre-filled pen or pre-filled syringe should be used for subcutaneous injection only. The recommended injection sites are the abdomen or thigh. When injecting in the same region, patients should be advised to use a different injection site each week; injections should never be given into areas where the skin is tender, bruised, red, or hard.
Comprehensive instructions for subcutaneous administration of Benlysta in a pre-filled pen or pre-filled syringe are provided at the end of the package leaflet (see Step-by-step instructions).

Benlysta has not been studied in the following patient groups and is not recommended in:
– severe active central nervous system lupus
– severe active lupus nephritis
– HIV
– a history of, or current, hepatitis B or C
– hypogammaglobulinaemia (IgG <400 mg/dl) or IgA deficiency (IgA
<10 mg/dl)
– a history of major organ transplant or hematopoietic stem cell/marrow
transplant or renal transplant.
Concomitant use with B cell targeted therapy or cyclophosphamide: Benlysta has not been studied in combination with other B cell targeted therapy or intravenous cyclophosphamide. Caution should be exercised if Benlysta is co-administered with other B cell targeted therapy or cyclophosphamide.
Hypersensitivity: Administration of subcutaneous or intravenous Benlysta may result in hypersensitivity reactions which can be severe, and fatal. In the event of a severe reaction, Benlysta administration must be interrupted and appropriate medical therapy administered. The risk of hypersensitivity reactions is greatest with the first two doses; however the risk should be considered for every administration. Patients with a history of multiple drug allergies or significant hypersensitivity may be at increased risk. Recurrence of clinically significant reactions after initial appropriate treatment of symptoms has also been observed.
Patients should be advised that hypersensitivity reactions are possible, on the day of, or several days after administration, and be informed of potential signs and symptoms and the possibility of recurrence. Patients should be instructed to seek immediate medical attention if they experience any of these symptoms. The package leaflet should be provided to the patient.
Delayed-type, non-acute hypersensitivity reactions have also been observed and included symptoms such as rash, nausea, fatigue, myalgia, headache, and facial oedema.
In intravenous clinical studies, serious infusion and hypersensitivity reactions included anaphylactic reaction, bradycardia, hypotension, angioedema, and dyspnoea. Please refer to the Summary of Product Characteristics for Benlysta powder for concentrate for solution for infusion.
Infections: The mechanism of action of belimumab could increase the risk for the development of infections, including opportunistic infections. Severe infections, including fatal cases, have been reported in SLE patients receiving immunosuppressant therapy, including belimumab. Physicians should exercise caution when considering the use of Benlysta in patients with severe or chronic infections or a history of recurrent infection. Patients who develop an infection while undergoing treatment with Benlysta should be monitored closely and careful consideration given to interrupting immunosuppressant therapy including belimumab until the infection is resolved. The risk of using Benlysta in patients with active or latent tuberculosis is unknown.
Progressive multifocal leukoencephalopathy: Progressive multifocal leukoencephalopathy (PML) has been reported with Benlysta treatment for SLE. Physicians should be particularly alert to symptoms suggestive of PML that patients may not notice (e.g., cognitive, neurological or psychiatric symptoms or signs).
Patients should be monitored for any of these new or worsening symptoms or signs, and if such symptoms/signs occur, referral to a neurologist and appropriate diagnostic measures for PML should be considered. If PML is suspected, further dosing must be suspended until PML has been excluded.
Immunisation: Live vaccines should not be given for 30 days before, or concurrently with Benlysta, as clinical safety has not been established. No data are available on the secondary transmission of infection from persons receiving live vaccines to patients receiving Benlysta.
Because of its mechanism of action, belimumab may interfere with the response to immunisations. However, in a small study evaluating the response to a 23-valent pneumococcal vaccine, overall immune responses to the different serotypes were similar in SLE patients receiving Benlysta compared with those receiving standard immunosuppressive treatment at the time of vaccination. There are insufficient data to draw conclusions regarding response to other vaccines.
Limited data suggest that Benlysta does not significantly affect the ability to maintain a protective immune response to immunisations received prior to administration of Benlysta. In a substudy, a small group of patients who had previously received either tetanus, pneumococcal or influenza vaccinations were found to maintain protective titres after treatment with Benlysta.
Malignancies and lymphoproliferative disorders: Immunomodulatory medicinal products, including Benlysta, may increase the risk of malignancy. Caution should be exercised when considering Benlysta therapy for patients with a history of malignancy or when considering continuing treatment in patients who develop malignancy. Patients with malignant neoplasm within the last 5 years have not been studied, with the exception of those with basal or squamous cell cancers of the skin, or cancer of the uterine cervix, that has been fully excised or adequately treated.
Sodium content: This medicinal product contains less than 1 mmol sodium (23 mg) per dose, i.e. essentially ‘sodium-free’.

No in vivo interaction studies have been performed. The formation of some CYP450 enzymes is suppressed by increased levels of certain cytokines during chronic inflammation. It is not known if belimumab could be an indirect modulator of such cytokines. A risk for indirect reduction of CYP activity by belimumab cannot be excluded. On initiation or discontinuation of belimumab, therapeutic monitoring should be considered for patients being treated with CYP substrates with a narrow therapeutic index, where the dose is individually adjusted (e.g. warfarin).

Pregnancy: There are a limited amount of data from the use of Benlysta in pregnant women. No formal studies have been conducted. Benlysta should not be used during pregnancy unless the potential benefit justifies the potential risk to the foetus.
Lactation: It is unknown whether Benlysta is excreted in human milk or is absorbed systemically after ingestion. However, belimumab was detected in the milk from female monkeys administered 150 mg/kg every 2 weeks.
Because maternal antibodies (IgG) are excreted in breast milk, it is recommended that a decision should be made whether to discontinue breast-feeding or to discontinue Benlysta therapy, taking into account the benefit of breast-feeding for the child and the benefit of therapy for the woman.
See prescribing information for full details.

There is limited clinical experience with overdose of Benlysta. Adverse reactions reported in association with cases of overdose have been consistent with those expected for belimumab.
Two doses up to 20 mg/kg administered 21 days apart by intravenous infusion have been given to humans with no increase in incidence or severity of adverse reactions compared with doses of 1, 4, or 10 mg/kg.
In the case of inadvertent overdose, patients should be carefully observed and supportive care administered, as appropriate.

Storage: Store in a refrigerator (2°C to 8°C) Until 30 minutes before use.
Do not freeze. Store in the original carton in order to protect from light.
Do not use if left out at room temperature more than 12 hours. Do not Shake.