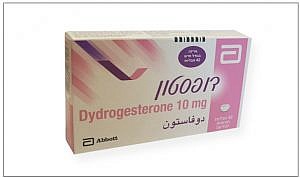 Cases where progesterone supplement is needed.

Vaginal bleeding, where the cause has not been established. Presence of serious liver disorders, or serious liver disorders in the medical history until the liver function values have returned to normal.
Contraindications for use of oestrogens in combination with progestogens such as dydrogesterone in combined therapy; Known hypersensitivity to dydrogesterone or any of the excipients. Known or suspected sex hormone dependent malignancies.

Before starting treatment with dydrogesterone because of disfunctional uterine bleeding an organic cause should be excluded. Breakthrough bleeding and spotting may occur during the first months of treatment. If breakthrough bleeeding and spotting continue to occur when treatment has already been underway for some time, or continue when treatment is discontinued, the cause of this should be ascertained, if necessary by taking an endometrial biopsy to exclude malignancy of the endometrium.
If one of the following disorders occurs during use for the first time or gets worse, stopping the treatment should be considered.
Exceptionally severe headache, migraine or symptoms that may indicate cerebral ischemia.
Marked increase in blood pressure.
Occurrence of venous thromboembolism.
In cases of habitual or threatened abortion, the viability of the foetus should be ascertained, and it is necessary to monitor during treatment whether the pregnancy is still progressing and whether the embryo is still alive.
Conditions for which monitoring is necessary: It is known that the following rarely occurring conditions may be affected by sex hormones and may arise or get worse during pregnancy or during the use of sex hormones: cholestatic icterus, herpes gestationis, severe pruritus, otosclerosis and porphyria.
Patients with a history of depression must be carefully monitored; if severe depression recurs, treatment with dydrogesterone must be stopped.
Other conditions: Patients with rare hereditary conditions such as galactose intolerance, Lapp lactase deficiency or glucose-galactose malabsorption should not use this medicinal product.

The adverse effects of this product most commonly reported in patients who were treated with drydrogesterone during clinical trials into indications without the use of oestrogen were metrorrhagia, painful/ sensitive breasts and migraine/headache.
Adverse effects that may occur during treatment with oestrogen-progestogen: Breast cancer, endometrial hyperplasia, endometrial carcinoma, ovarian cancer. Venous thromboembolism.  Myocardial infarction, coronary heart disease, ischemic CVA.
For full details see prescribing information.

Data from in vitro studies show that dydrogesterone and its main metabolite 20α-dihydrodydrogesterone (DHD) may be broken down by the P 450 cytochrome isoenzymes 3A4 and 2C19.
The metabolisation of dydrogesterone may therefore be increased by concomittant use of substances known to induce these isoenzymes, such as anticonvulsants (e.g. phenobarbital, phenytoin, carbamazepine), anti-infectives (e.g. rifampicin, rifabutin, nevirapine, efavirenz) and herbal preparations containing e.g. St. John’s Wort (hypericum perforatum), valerian root, sage, or gingko biloba.
Ritonavir and nelfinavir are of course well-known powerful inhibitors of cytochrome enzymes but do in fact have an enzyme-inducing action if they are used concomitantly with steroid hormones.
Clinically an increase in the metabolisation of dydrogesterone may lead to a reduction in effect and changes in the bleeding pattern. In vitro studies show that dydrogesterone and DHD enzymes that metabolise CYP substances do not inhibit or induce.

Pregnancy: It is estimated that over 9 million women have already been exposed to dydrogesterone during pregnancy. To date there were no indications that the use of dydrogesterone during pregnancy has a harmful effect. In the literature a study is described in which it was found that the use of some progestogens can be accompanied by an increase in the risk of hypospadia occurring. However, because this has not been clearly confirmed to date in other studies, no final conclusion can be drawn about the effect of progestogens on the occurrence of hypospadia.
Clinical trials in which a limited number of women were treated with dydrogesterone in the first stage of pregnancy did not show that the risk is increased. To date no other epidemiological data are available.
The effects that were observed during non-clinical study into embryo-foetal and postnatal development corresponded with the pharmacological profile. Unwanted effects only occurred in case of exposure that was considerably higher than the maximum exposure in humans (see section 5.3).
Dydrogesterone may be administered during pregnancy if there is a clear indication for this.
Lactation: It is not known whether dydrogesterone is excreted in breast milk. No research has been done into the excretion of dydrogesterone in breast milk. Experiences with other progestogens indicate that progestogens and their metabolites are found in small quantities in breast milk. It is not known whether there is a risk for the child. Dydrogesterone should therefore not be used while breastfeeding.

Symptoms: Dydrogesterone is a substance with very low toxicity. Nausea, vomiting, lethargy and dizziness are symptoms which may theoretically occur in the event of an overdose. There are no known cases in which an overdose of dydrogesterone led to harmful effects.
Treatment: Specific treatment is clearly not necessary. In case of overdose symptomatic treatment may be considered.